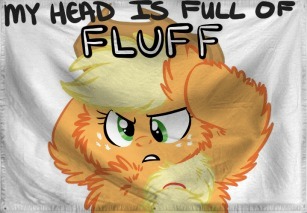 The Agricultural Paradise of AppleJacky is a gargantuan, socially progressive nation, ruled by Applejack the Apple Queen with a fair hand, and notable for its keen interest in outer space, anti-smoking policies, and punitive income tax rates. The compassionate, democratic, cheerful population of 12.879 billion AppleJackyians love a good election, and the government gives them plenty of them. Universities tend to be full of students debating the merits of various civil and political rights, while businesses are tightly regulated and the wealthy viewed with suspicion.

The government — a sprawling, bureaucracy-choked, socially-minded morass — juggles the competing demands of Education, Environment, and Administration. It meets to discuss matters of state in the capital city of Canterlot. The income tax rate is 100%.

The frighteningly efficient AppleJackyian economy, worth a remarkable 4,180 trillion Bits a year, is driven entirely by a combination of government and state-owned industry, with private enterprise illegal. The industrial sector, which is extremely specialized, is mostly made up of the Book Publishing industry, with significant contributions from Information Technology. Average income is an amazing 324,566 Bits, and distributed extremely evenly, with practically no difference between the richest and poorest citizens.

Terrorists are on a first name basis with the officials that stamp their passports, polygraphs are relegated to the dungeon exhibit in castle museums, dog breeding has been banned in accordance with recent animal experimentation laws, and only adults may purchase violent video games. Crime is totally unknown, thanks to a capable police force and progressive social policies in education and welfare. AppleJacky's national animal is the Doge, which frolics freely in the nation's many lush forests, and its national religion is Ponyism.

AppleJacky is ranked 239,949th in the world and 3rd in Papastan for Largest Cheese Export Sector, scoring -18.55 on the Mozzarella Productivity Index.

Most Recent Government Activity: 22 hours ago