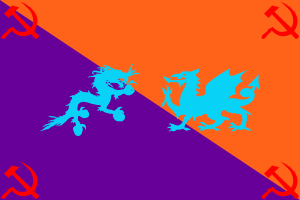 The Fauzjhian Province of Bhrazjhia is a gargantuan, socially progressive nation, ruled by Vickie Nadeau-Bolivar with a fair hand, and renowned for its anti-smoking policies, aversion to nipples, and devotion to social welfare. The compassionate, democratic, cheerful population of 13.169 billion Bhrazjhians are free to do what they want with their own bodies, and vote for whomever they like in elections; if they go into business, however, they are regulated to within an inch of their lives.

The enormous, liberal, socially-minded, outspoken government juggles the competing demands of Education, Environment, and Healthcare. It meets to discuss matters of state in the capital city of Wyvernia. The income tax rate is 100%.

The frighteningly efficient Bhrazjhian economy, worth a remarkable 4,650 trillion Fauzjhiaus a year, is driven entirely by a combination of government and state-owned industry, with private enterprise illegal. The industrial sector, which is highly specialized, is led by the Tourism industry, with major contributions from Information Technology and Book Publishing. Average income is an amazing 353,136 Fauzjhiaus, and distributed extremely evenly, with little difference between the richest and poorest citizens.

Builders across Bhrazjhia are blocked up with orders for new public loos, the Bhrazjhian Intelligence Agency relies on internet search engines to know what is happening overseas, prankster scientists legally change their names to silly pseudonyms before major discoveries, and judicial robes are the country's hottest fashion trend. Crime is totally unknown, thanks to a capable police force and progressive social policies in education and welfare. Bhrazjhia's national animal is the Christmas Bat, which soars majestically through the nation's famously clear skies.