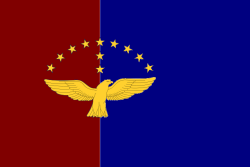 The Federated Union of Democratic Colonies is a gargantuan, socially progressive nation, ruled by Secretary General Thomas Mills with an even hand, and renowned for its otherworldly petting zoo, frequent executions, and ubiquitous missile silos. The compassionate, cheerful population of 38.192 billion Colonials have some civil rights, but not too many, enjoy the freedom to spend their money however they like, to a point, and take part in free and open elections, although not too often.

The relatively small government prioritizes Education, although Defense, Healthcare, and Industry are also considered important, while Spirituality and International Aid receive no funds. It meets to discuss matters of state in the capital city of Viconia. The average income tax rate is 16.0%, but much higher for the wealthy.

The frighteningly efficient Colonial economy, worth a remarkable 8,029 trillion DC Credits a year, is led by the Book Publishing industry, with significant contributions from Information Technology, Arms Manufacturing, and Automobile Manufacturing. Average income is an amazing 210,245 DC Credits, and evenly distributed, with the richest citizens earning only 2.4 times as much as the poorest.

The government regularly hires contractors to construct high rise apartments, the intelligence community is playing 4-D chess with an imaginary spy network, children need to wear helmets and safety harnesses before mounting a carousel horse, and selfie stick use is a required Scout badge. Crime is totally unknown. Democratic Colonies's national animal is the Amber Hawk, which teeters on the brink of extinction due to toxic air pollution.

Democratic Colonies is ranked 5,193rd in the world and 3rd in Greater Prussia for Highest Poor Incomes, with 132,260.29 Standard Monetary Units.