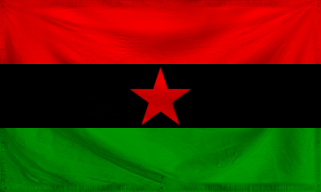 The Federation of Denun is a gargantuan, genial nation, ruled by DEMaken Natal NataS ||| with an iron fist, and remarkable for its ubiquitous missile silos, public floggings, and devotion to social welfare. The compassionate, cynical, humorless population of 12.884 billion Demunians are ruled without fear or favor by a psychotic dictator, who outlaws just about everything and refers to the populace as "my little playthings."

The enormous, corrupt, moralistic, socially-minded, well-organized government juggles the competing demands of Defense, Education, and Law & Order. It meets to discuss matters of state in the capital city of Port Vadnsko. The average income tax rate is 99.4%.

The frighteningly efficient Demunian economy, worth a remarkable 2,830 trillion Tu$oDs a year, is led by the Information Technology industry, with major contributions from Arms Manufacturing, Book Publishing, and Tourism. State-owned companies are common. Average income is an amazing 219,682 Tu$oDs, and evenly distributed, with the richest citizens earning only 2.5 times as much as the poorest.

Attempts to inform people about their unclaimed property are often mistaken for telephone scams, extreme hiring regulations mean a job in Denun is often a lifetime appointment, families waiting for delayed pipe installations hope daily for rain, and Jennifer Government is a bestseller. Crime, especially youth-related, is totally unknown, thanks to a well-funded police force and progressive social policies in education and welfare. Denun's national animal is the Owl, which soars majestically through the nation's famously clear skies, and its national religion is Mallah-Ter.

Denun is ranked 3,363rd in the world and 1st in The Land Ov Denun for Most Advanced Law Enforcement, scoring 12,135.47 on the Orwell Orderliness Index.