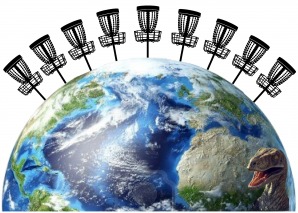 The Smokin Green Land of DiscGolfLand is a gargantuan, environmentally stunning nation, ruled by Tournament Director with an even hand, and notable for its infamous sell-swords, free-roaming dinosaurs, and punitive income tax rates. The compassionate, cheerful, devout population of 10.25 billion DiscGolfLandians enjoy extensive civil rights and enjoy a level of social equality free from the usual accompanying government corruption.

The large, liberal government juggles the competing demands of Education, Environment, and Welfare. It meets to discuss matters of state in the capital city of The Course. The income tax rate is 100%.

The frighteningly efficient DiscGolfLandian economy, worth a remarkable 3,285 trillion Discs a year, is driven entirely by a combination of government and state-owned industry, with private enterprise illegal. The industrial sector, which is quite specialized, is led by the Information Technology industry, with major contributions from Tourism and Book Publishing. Average income is an amazing 320,496 Discs, and distributed extremely evenly, with practically no difference between the richest and poorest citizens.

A cat may look at a king and a dude can look at an ass, produce labels read 'may contain traces of food', eight-year-olds can be seen lighting up in public areas, and drills and shovels have been banned as the government cracks down on any means of fracking. Crime is totally unknown. DiscGolfLand's national animal is the Raptor, which frolics freely in the nation's many lush forests, and its national religion is Disc Golf in Nature.

DiscGolfLand is ranked 136,636th in the world and 1,024th in the West Pacific for Largest Black Market, with 193 billion Standard Monetary Units.

One Nation under Rob,