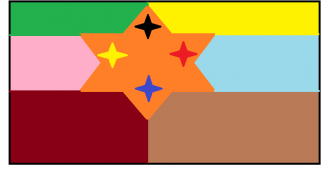 The Federal Republic of Drunken Seal Islands is a gargantuan, safe nation, ruled by jizzmaster zero with an even hand, and remarkable for its museums and concert halls, public floggings, and punitive income tax rates. The compassionate population of 10.995 billion Sealsmen are fiercely patriotic and enjoy great social equality; they tend to view other, more capitalist countries as somewhat immoral and corrupt.

The enormous, corrupt, socially-minded government juggles the competing demands of Education, Defense, and Healthcare. The average income tax rate is 93.5%, and even higher for the wealthy.

The frighteningly efficient Drunken Seal Islandsian economy, worth a remarkable 1,475 trillion Krangs a year, is driven entirely by a combination of government and state-owned industry, with private enterprise illegal. The industrial sector, which is quite specialized, is led by the Information Technology industry, with major contributions from Book Publishing, Arms Manufacturing, and Tourism. Average income is an impressive 134,236 Krangs, and distributed extremely evenly, with practically no difference between the richest and poorest citizens.

Lavish state dinners in Drunken Seal Islands City are the state's leading budgetary expenditure, the working classes live and die on the fields of the farming communes, there has been a series of riots between local cannibals and health food advocates, and few that venture into government archives are ever seen again. Crime, especially youth-related, is totally unknown, thanks to a very well-funded police force and progressive social policies in education and welfare. Drunken Seal Islands's national animal is the Drop Bear, which frolics freely in the nation's many lush forests, and its national religion is Boganism.

The Brazillian Parlament Of Idideology,