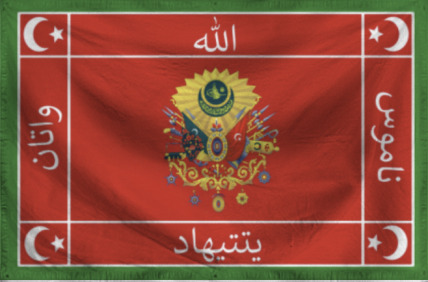 The Imperial Sultanate of Greater Ismir is a colossal, environmentally stunning nation, ruled by Bahtiyar Osman with an even hand, and remarkable for its prohibition of alcohol, pith helmet sales, and keen interest in outer space. The hard-nosed, devout population of 5.32 billion Izmiri are prohibited from doing almost everything except voting, which they do timidly and conservatively.

The medium-sized, corrupt government juggles the competing demands of Law & Order, Education, and Administration. It meets to discuss matters of state in the capital city of Nëö-İstanbül. The average income tax rate is 67.1%, and even higher for the wealthy.

The frighteningly efficient Izmiri economy, worth 677 trillion diravcins a year, is driven entirely by a combination of government and state-owned industry, with private enterprise illegal. However, for those in the know, there is a large, well-organized, fairly diversified black market in Arms Manufacturing, Information Technology, Beef-Based Agriculture, and Furniture Restoration. The private sector mostly consists of enterprising ten-year-olds selling lemonade on the sidewalk, but the government is looking at stamping this out. Average income is an impressive 127,299 diravcins, and evenly distributed, with the richest citizens earning only 2.9 times as much as the poorest.

Viewers get headaches from trying to read the screen full of small print warnings that precede most TV shows, lawyers spend as much time preparing their make-up as they do their briefs, police are arresting costumed characters at comic book conventions, and citizens who fail to follow the official national religion are executed. Crime, especially youth-related, is totally unknown, thanks to a very well-funded police force and progressive social policies in education and welfare. Greater Ismir's national animal is the Gray Wolf, which is also the nation's favorite main course, and its national religion is Ottoman Islam and Orthodox Christianity.

Greater Ismir is ranked 198,903rd in the world and 19th in Divine Mandate of Sanctum for Most Politically Free, scoring 42.67 on the Diebold Election Inking Scale.