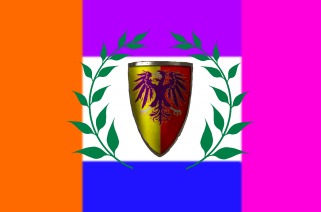 The Exalted Republic of Iacomia is a gargantuan, genial nation, ruled by Reginald Worthington-Smythe with an iron fist, and remarkable for its museums and concert halls, sprawling nuclear power plants, and smutty television. The compassionate, cynical, cheerful population of 15.845 billion Iacoms are proud of their wide-ranging civil freedoms, and those who aren't tend to be dragged off the streets by men in dark suits and hustled into cars with tinted windows.

It is difficult to tell where the omnipresent, corrupt government stops and the rest of society begins, but it juggles the competing demands of Education, Environment, and Healthcare. It meets to discuss matters of state in the capital city of Iacomiopolis. The income tax rate is 100%.

The frighteningly efficient Iacomian economy, worth a remarkable 2,653 trillion New Republican Goatrarches a year, is driven almost entirely by government activity, with private enterprise illegal. The industrial sector is solely comprised of the Information Technology industry. State-owned companies are the norm. Average income is an impressive 167,496 New Republican Goatrarches, and distributed extremely evenly, with little difference between the richest and poorest citizens.

The government tries not to listen to the people unless it absolutely has to, psychiatrists that date patients are congratulated on their romantic conquests, the nation is so apathetic that Iacoms can barely find the energy to bring new issues to the government, and shock troops shock enemy forces with their nudity. Crime is totally unknown. Iacomia's national animal is the Goat, which frolics freely in the nation's many lush forests, and its national religion is rather pleasant.

Iacomia is ranked 100,616th in the world and 4th in The Associated States of the Oort Cloud for Largest Black Market, with 481 billion Standard Monetary Units.