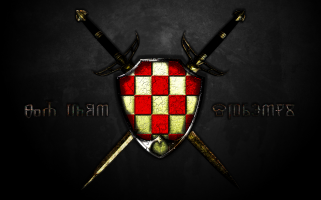 The Dictatorship of Independent Federation of Croatia is a gargantuan, safe nation, ruled by National Leader with an iron fist, and renowned for its anti-smoking policies, ban on automobiles, and devotion to social welfare. The hard-nosed, cynical, humorless, devout population of 12.595 billion Croats are ruled without fear or favor by a psychotic dictator, who outlaws just about everything and refers to the populace as "my little playthings."

The enormous, corrupt, moralistic, socially-minded, well-organized government juggles the competing demands of Law & Order, Education, and Defense. It meets to discuss matters of state in the capital city of Metropolis Aryans. The income tax rate is 100%.

The frighteningly efficient Independent Federation of Croatian economy, worth a remarkable 4,393 trillion Kunas a year, is driven entirely by a combination of government and state-owned industry, with private enterprise illegal. The industrial sector, which is highly specialized, is led by the Information Technology industry, with major contributions from Arms Manufacturing and Uranium Mining. Average income is an amazing 348,828 Kunas, and distributed extremely evenly, with little difference between the richest and poorest citizens.

The police motto is "to protect and not to serve", bands of adventurers rove the countryside searching for monsters, the nation grinds to a halt for afternoon tea, and Bambi has been banned. Crime, especially youth-related, is totally unknown, thanks to the all-pervasive police force and progressive social policies in education and welfare. Independent Federation of Croatia's national animal is the Wolf, which frolics freely in the nation's many lush forests, and its national religion is Statism.

Independent Federation of Croatia is ranked 3,396th in the world and 6th in The Alliance of Dictators for Highest Foreign Aid Spending, scoring 3,191.71 on the Clooney Contribution Index.

The Peoples Republic of Baschland,