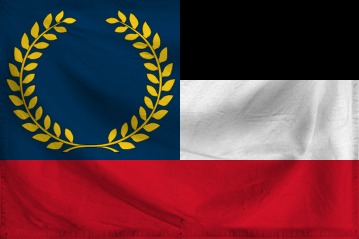 The Shadow Cult of Jocospor is a gargantuan, cultured nation, ruled by Emperor Agustín I with an iron fist, and notable for its prohibition of alcohol, public floggings, and national health service. The hard-nosed, hard-working, cynical, humorless population of 12.061 billion Jocospites are ruled by a mostly-benevolent dictator, who grants the populace the freedom to live their own lives but watches carefully for anyone to slip up.

The enormous, corrupt, well-organized government juggles the competing demands of Defense, Law & Order, and Industry. It meets to discuss matters of state in the capital city of Vocryae. The average income tax rate is 87.9%, and even higher for the wealthy.

The frighteningly efficient Jocospite economy, worth a remarkable 2,216 trillion Flamas a year, is quite specialized and mostly comprised of black market activity, especially in Arms Manufacturing, Door-to-door Insurance Sales, Information Technology, and Uranium Mining. Average income is an impressive 183,755 Flamas, and evenly distributed, with the richest citizens earning only 2.9 times as much as the poorest.

Enemy agents often find themselves caught in a bind, internet moderators work overtime to remove memes comparing Emperor Agustín I to cartoon bears, battlefield gains are quickly lost when enemies don't respect a time-out, and the intelligence community is playing 4-D chess with an imaginary spy network. Crime, especially youth-related, is totally unknown, thanks to the all-pervasive police force and progressive social policies in education and welfare. Jocospor's national animal is the Finch, which is also the nation's favorite main course, and its national religion is Moderatism.

Jocospor is ranked 314th in the world and 6th in Confederation of Corrupt Dictators for Most Advanced Law Enforcement, scoring 25,008.15 on the Orwell Orderliness Index.

The Destroyers of Christianity,

The land of certain death,

Kleptocratic Bureau of Foreign Affairs, and 23 others.

The Great Nation of Great People,