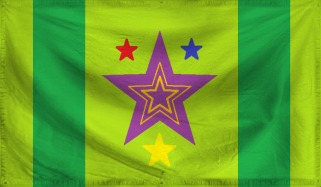 The People's Republic of Kagorg Bra Corna is a colossal, cultured nation, ruled by Sovereign R with a fair hand, and notable for its smutty television, ban on automobiles, and keen interest in outer space. The compassionate, democratic, cheerful population of 9.878 billion Kagorg Bra Cornans are free to do what they want with their own bodies, and vote for whomever they like in elections; if they go into business, however, they are regulated to within an inch of their lives.

The enormous, outspoken government juggles the competing demands of Education, Environment, and Administration. It meets to discuss matters of state in the capital city of Kagorg Bra Corna City. The average income tax rate is 95.9%.

The frighteningly efficient Kagorg Bra Cornan economy, worth a remarkable 1,199 trillion Raccoins a year, is driven entirely by a combination of government and state-owned industry, with private enterprise illegal. The industrial sector, which is extremely specialized, is mostly made up of the Information Technology industry, with significant contributions from Book Publishing. Average income is an impressive 121,466 Raccoins, and distributed extremely evenly, with practically no difference between the richest and poorest citizens.

Foreign policy is to avoid standing up to bullies, the latest political memes depict Sovereign R as an overly-choreographed robot, gossip magazines have pictures of Sovereign R sunbathing on the beach with political rivals, and nouveau riche farmers diligently take care of their golden calf herds. Crime, especially youth-related, is totally unknown, thanks to a well-funded police force and progressive social policies in education and welfare. Kagorg Bra Corna's national animal is the raccoon, which frolics freely in the nation's many lush forests.

Kagorg Bra Corna is ranked 2,016th in the world and 63rd in The East Pacific for Most Beautiful Environments, with 3,330.06 Pounds Of Wildlife Per Square Mile.