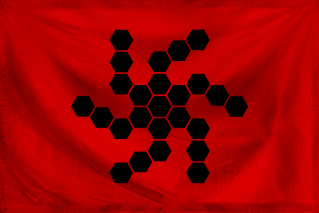 The Fair State of Larinia is a gargantuan, safe nation, ruled by Zsoltan Miola with a fair hand, and remarkable for its museums and concert halls, complete lack of prisons, and restrictive gun laws. The compassionate, democratic, cheerful population of 12.336 billion Larines love a good election, and the government gives them plenty of them. Universities tend to be full of students debating the merits of various civil and political rights, while businesses are tightly regulated and the wealthy viewed with suspicion.

The large, socially-minded, outspoken government juggles the competing demands of Education, Environment, and Administration. It meets to discuss matters of state in the capital city of Nyinkormänok. The income tax rate is 100%.

The frighteningly efficient Lariny economy, worth a remarkable 3,707 trillion lorváks a year, is driven entirely by a combination of government and state-owned industry, with private enterprise illegal. The industrial sector, which is highly specialized, is led by the Information Technology industry, with major contributions from Book Publishing and Tourism. Average income is an amazing 300,561 lorváks, and distributed extremely evenly, with practically no difference between the richest and poorest citizens.

The new Refuse Hills housing development is under construction, jokes told in elementary school often come back to haunt politicians, tabloids publicly shun nurses for not calling home on the weekends, and badminton was recently banned due to 'unacceptable violence' inherent to the game. Crime, especially youth-related, is totally unknown, thanks to a well-funded police force and progressive social policies in education and welfare. Larinia's national animal is the Alicorn, which frolics freely in the nation's many lush forests.

Larinia is ranked 293rd in the world and 11th in Lazarus for Most Developed, scoring 99.27 on the Human Development Index.