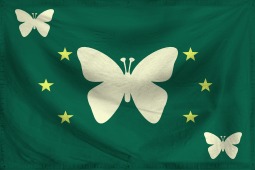 The Potato General of Lauchenoiria is a colossal, genial nation, ruled by Josephine Alvarez with a fair hand, and remarkable for its multi-spousal wedding ceremonies, free-roaming dinosaurs, and irreverence towards religion. The compassionate, democratic, cheerful population of 6.968 billion Lauchenoirians enjoy a sensible mix of personal and economic freedoms, while the political process is open and the people's right to vote held sacrosanct.

The large, outspoken government juggles the competing demands of Education, Environment, and Healthcare. It meets to discuss matters of state in the capital city of Buttercity. The average income tax rate is 90.6%, and even higher for the wealthy.

The frighteningly efficient Lauchenoirian economy, worth 919 trillion pesos a year, is highly specialized and led by the Tourism industry, with major contributions from Book Publishing, Information Technology, and Basket Weaving. State-owned companies are common. Average income is an impressive 131,904 pesos, and distributed extremely evenly, with little difference between the richest and poorest citizens.

Strip mining of rare earth metals is up while back problems are down, recognizing the Lauchenoirian flag qualifies you for citizenship, royalist is the most offensive slur in the Lauchenoirian language, and hypochondriacs demand treatment for genetic disorders they don't have. Crime, especially youth-related, is totally unknown, thanks to a capable police force and progressive social policies in education and welfare. Lauchenoiria's national animal is the butterfly, which soars majestically through the nation's famously clear skies, and its national religion is Atheism.

Lauchenoiria is ranked 221,638th in the world and 95th in International Democratic Union for Largest Soda Pop Sector, scoring -18.49 on the Addison-Fukk Productivity Rating.

Most Recent Government Activity: 9 hours ago