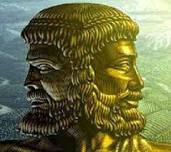 The Magical Mediator of Mediobogdum II is a gargantuan, environmentally stunning nation, ruled by Antoninus with an iron fist, and renowned for its deadly medical pandemics, daily referendums, and frequent executions. The hard-nosed, hard-working, cynical, humorless population of 16.148 billion Mediobogdumians are kept under strict control by the oppressive government, which measures its success by the nation's GDP and refers to individual citizens as "human resources."

The large, corrupt government juggles the competing demands of Law & Order, Industry, and Administration. It meets to discuss matters of state in the capital city of Herculaneum. Citizens pay a flat income tax of 70.2%.

The frighteningly efficient Mediobogdum IIian economy, worth a remarkable 2,815 trillion Aes signatums a year, is quite specialized and mostly comprised of black market activity, especially in Arms Manufacturing, Uranium Mining, Information Technology, and Pizza Delivery. Average income is an impressive 174,359 Aes signatums, with the richest citizens earning 8.8 times as much as the poorest.

Lobbyists are trying to convince government to recategorize most natural disasters as "non-critical naturogenic inconveniences", people are careful to avoid hyperbolising that they'd "rather die" than support Antoninus, financial investors are noting a boom in artillery, and wildlife parks are packed with poachers yet increasingly devoid of animals. Crime, especially youth-related, is totally unknown, thanks to the all-pervasive police force and progressive social policies in education and welfare. Mediobogdum II's national animal is the Lynx Vampire, which frolics freely in the nation's many lush forests, and its national religion is Sun Worship.

Mediobogdum II is ranked 21,404th in the world and 1,208th in Osiris for Most Advanced Public Education, scoring 6,908.88 on the Edu-tellignce® Test Score.