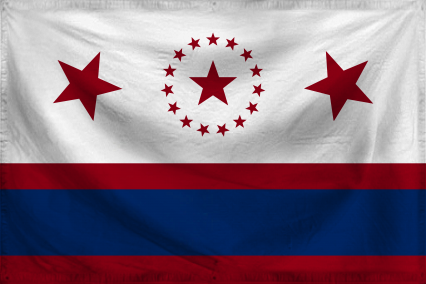 The Holy Republic of Orca and Narwhal is a colossal, socially progressive nation, ruled by Drum Major Lawrence with a fair hand, and remarkable for its public floggings, ubiquitous missile silos, and aversion to nipples. The compassionate, democratic population of 8.373 billion Orca and Narwhalians are fiercely patriotic and enjoy great social equality; they tend to view other, more capitalist countries as somewhat immoral and corrupt.

The enormous government juggles the competing demands of Education, Environment, and Healthcare. It meets to discuss matters of state in the capital city of Generals City. The average income tax rate is 91.7%, and even higher for the wealthy.

The all-consuming Orca and Narwhalian economy, worth 963 trillion Narwhals a year, is highly specialized and mostly made up of the Information Technology industry, with significant contributions from Book Publishing, Arms Manufacturing, and Tourism. State-owned companies are common. Average income is an impressive 115,120 Narwhals, and distributed extremely evenly, with practically no difference between the richest and poorest citizens.

Therapists dispense hugs for heroin dealers and cuddles for crackheads, more sidewalk is dedicated to animals than people, government agents stalk the aisles of grocery stores for out-of-stock medications, and imitation is the sincerest form of felony. Crime, especially youth-related, is totally unknown, thanks to a very well-funded police force and progressive social policies in education and welfare. Orca and Narwhal's national animal is the Orca, which frolics freely in the nation's sparkling oceans.

Orca and Narwhal is ranked 228,761st in the world and 81st in The Democratic Republic for Largest Cheese Export Sector, scoring -9.21 on the Mozzarella Productivity Index.