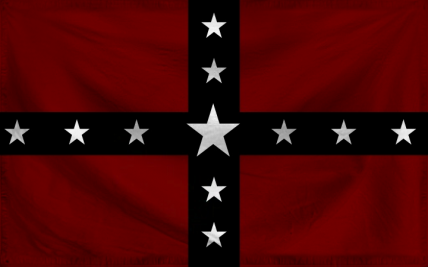 The Confederate Dominion of Separatist Peoples is a gargantuan, cultured nation, ruled by President Appoline Hewitt with a fair hand, and notable for its deadly medical pandemics, unlimited-speed roads, and irreverence towards religion. The hard-nosed, hard-working, democratic, humorless population of 18.027 billion Separatists hold their civil and political rights very dear, although the wealthy and those in business tend to be viewed with suspicion.

The relatively small, liberal government is primarily concerned with Defense, although Education is also considered important, while Spirituality and Social Policy are ignored. It meets to discuss matters of state in the capital city of New Gettysburg. The average income tax rate is 57.6%, and even higher for the wealthy.

The frighteningly efficient Separatist economy, worth a remarkable 4,336 trillion almighty Greenbacks a year, is led by the Arms Manufacturing industry, with major contributions from Information Technology, Book Publishing, and Tourism. Average income is an amazing 240,559 almighty Greenbacks, and evenly distributed, with the richest citizens earning only 2.1 times as much as the poorest.

The Supreme Court vehemently protects civil rights and the right to privacy, witnesses have to run a gauntlet of mob enforcers to testify at trials, nuclear physics is the most popular course at university, and organisations with 800 in their phone number are often raided by special forces. Crime, especially youth-related, is totally unknown. Separatist Peoples's national animal is the Osprey, which soars majestically through the nation's famously clear skies, and its national religion is nonexistent.

Separatist Peoples is ranked 95,840th in the world and 47th in International Democratic Union for Most Extreme, scoring 18.98 on the Paul-Nader Subjective Decentrality Index.