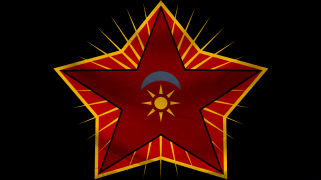 The Socialist Republic of Stalliongrad and Far-Eastern Territories is a gargantuan, safe nation, ruled by Comrade Scarlet with an even hand, and notable for its national health service, irreverence towards religion, and stringent health and safety legislation. The compassionate population of 15.27 billion Stalliongraders enjoy extensive civil rights and enjoy a level of social equality free from the usual accompanying government corruption.

The enormous, corrupt government prioritizes Education, although Healthcare, Law & Order, and Environment are also considered important, while Spirituality isn't funded at all. It meets to discuss matters of state in the capital city of Stalliongrad. The income tax rate is 100%.

The frighteningly efficient Stalliongradish economy, worth a remarkable 3,364 trillion Stalliongrad Rubles a year, is driven entirely by a combination of government and state-owned industry, with private enterprise illegal. The industrial sector, which is highly specialized, is led by the Information Technology industry, with major contributions from Tourism and Book Publishing. Average income is an amazing 220,355 Stalliongrad Rubles, and distributed extremely evenly, with little difference between the richest and poorest citizens.

Party-lovers often change religions just for the weekend, stern tutting by international commentators has persuaded Stalliongrad and Far-Eastern Territories to disarm, power to the people comes from the barrel of a gun, and shelters struggle to keep up with the endless intake of stray animals. Crime, especially youth-related, is totally unknown, thanks to a very well-funded police force and progressive social policies in education and welfare. Stalliongrad and Far-Eastern Territories's national animal is the Raven, which soars majestically through the nation's famously clear skies, and its national religion is Reconstructionist Judaism.

Stalliongrad and Far-Eastern Territories is ranked 223,751st in the world and 709th in The Communist Bloc for Largest Cheese Export Sector, scoring -8.39 on the Mozzarella Productivity Index.

The Workers Union of Habsburg-Lorraine,

The Tsardom of Muscovy,