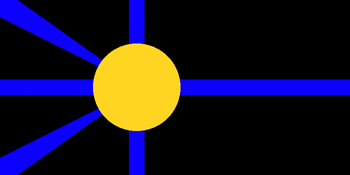 The United Republics of Sulaymaan is a gargantuan, efficient nation, ruled by Alastair Riothamus with an even hand, and notable for its keen interest in outer space, sprawling nuclear power plants, and absence of drug laws. The hard-nosed, democratic, humorless population of 28.363 billion Sulayians have some civil rights, but not too many, enjoy the freedom to spend their money however they like, to a point, and take part in free and open elections, although not too often.

The minute, corrupt government, or what there is of one, juggles the competing demands of Defense, Education, and Law & Order. It meets to discuss matters of state in the capital city of Khotan. Income tax is unheard of.

The frighteningly efficient Sulaymaanian economy, worth an astonishing 16,180 trillion Sulaymaan soums a year, is broadly diversified and led by the Arms Manufacturing industry, with major contributions from Information Technology, Uranium Mining, and Soda Sales. Black market activity is rampant. State-owned companies are common. Average income is a breathtaking 570,474 Sulaymaan soums, and distributed extremely evenly, with little difference between the richest and poorest citizens.

Diplomatic missions typically end with a flurry of childish insults, accusations and phlegm, East Lebatuckese astronauts' favorite game during downtime on the Multinational Space Station is 'I Spy', parking's carefree without parking car fees, and conspiracy theorists allege that the government is spying on them through their carbon monoxide detectors. Crime, especially youth-related, is totally unknown. Sulaymaan's national animal is the Sugar Glider, which is also the nation's favorite main course, and its national religion is Freedom of Religion.

Sulaymaan is ranked 242,150th in the world and 5th in Nova for Most Popular Tourist Destinations, with 4.02 Tourists Per Hour.