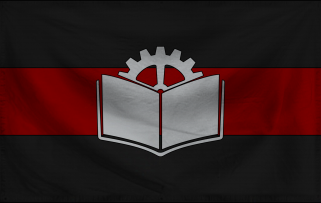 The Empire of The Promethean Fists is a gargantuan, efficient nation, ruled by Heino Berezin with an iron fist, and remarkable for its barren, inhospitable landscape, aversion to nipples, and compulsory military service. The hard-nosed, hard-working, cynical, humorless, devout population of 19.901 billion Prometheans are rabid consumers, partly through choice and partly because the government tells them to and dissenters tend to vanish from their homes at night.

The tiny, corrupt government prioritizes Defense, although Law & Order, Education, and Administration are also considered important, while Social Policy and Welfare aren't funded at all. It meets to discuss matters of state in the capital city of Pyros. Citizens pay a flat income tax of 1.5%.

The frighteningly efficient Promethean economy, worth a remarkable 4,114 trillion Cogs a year, is broadly diversified and dominated by the Arms Manufacturing industry, with significant contributions from Uranium Mining, Retail, and Information Technology. Black market activity is notable. Average income is an amazing 206,766 Cogs, but there is a large disparity between incomes, with the richest 10% of citizens earning 784,461 per year while the poor average 37,832, a ratio of 20.7 to 1.

No one is quite sure what many government officials look like, public incontinence is a growing problem amongst the nation's women, hundreds of sailors ride the good ship Heino Berezin day after day, and surrogate mothers are encouraged to refer to their wombs as 'rental space'. Crime, especially youth-related, is totally unknown, thanks to a capable police force. The Promethean Fists's national animal is the Bear, which teeters on the brink of extinction due to widespread deforestation, and its national religion is the Cult of Flesh and Iron.

The Promethean Fists is ranked 1,594th in the world and 8th in Texas for Highest Disposable Incomes, with 203,664.95 Standard Monetary Units.

Most Recent Government Activity: 16 days ago