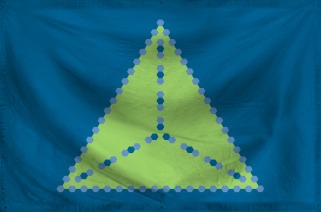 The Dominion of The Undivided is a colossal, safe nation, renowned for its compulsory military service, keen interest in outer space, and punitive income tax rates. The hard-nosed, humorless population of 8.127 billion Undivided are fiercely patriotic and enjoy great social equality; they tend to view other, more capitalist countries as somewhat immoral and corrupt.

The enormous, corrupt government juggles the competing demands of Education, Law & Order, and Administration. It meets to discuss matters of state in the capital city of Cerebellum. The average income tax rate is 97.4%.

The frighteningly efficient Undivided economy, worth a remarkable 1,274 trillion Units a year, is driven entirely by a combination of government and state-owned industry, with private enterprise illegal. The industrial sector, which is highly specialized, is mostly made up of the Information Technology industry, with significant contributions from Arms Manufacturing. Average income is an impressive 156,857 Units, and distributed extremely evenly, with little difference between the richest and poorest citizens.

Trouble-makers are frequently turned in to the government to be 'recycled', public executions just aren't the cheery spectacles they once were, signs at the border tell international drivers where they can put their cars, and daring to agree with another politician is grounds for instant dismissal. Crime, especially youth-related, is totally unknown, thanks to the all-pervasive police force and progressive social policies in education and welfare. The Undivided's national animal is the Phoenix, which soars majestically through the nation's famously clear skies.

The Undivided is ranked 7,065th in the world and 161st in the West Pacific for Highest Poor Incomes, with 118,185.36 Standard Monetary Units.

Papercuts and Skittles, and 108 others.