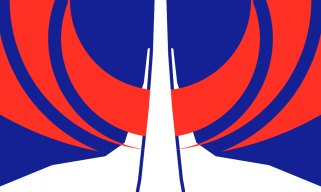 The Queendom of Tvanksta is a massive, efficient nation, ruled by Audra Milegaude with an iron fist, and renowned for its smutty television, public floggings, and anti-smoking policies. The hard-nosed, cynical, humorless, devout population of 4.006 billion Tvankstans are ruled by a mostly-benevolent dictator, who grants the populace the freedom to live their own lives but watches carefully for anyone to slip up.

The large, corrupt, well-organized government is primarily concerned with Defense, with Law & Order, Spirituality, and Environment also on the agenda, while Education and International Aid receive no funds. It meets to discuss matters of state in the capital city of Saint Auszra. Citizens pay a flat income tax of 76.3%.

The powerhouse Tvankstan economy, worth 664 trillion grossuses a year, is driven entirely by a combination of government and state-owned industry, with private enterprise illegal. However, for those in the know, there is an enormous, deeply entrenched, quite specialized black market in Arms Manufacturing, Beef-Based Agriculture, Uranium Mining, and Basket Weaving. The private sector mostly consists of enterprising ten-year-olds selling lemonade on the sidewalk, but the government is looking at stamping this out. Average income is an impressive 165,819 grossuses, but there is a large disparity between incomes, with the richest 10% of citizens earning 690,453 per year while the poor average 26,032, a ratio of 26.5 to 1.

A suspicious number of male students have joined the Ladies' Wrestling League, a popular saying is "a chicken for every pot and an abortion clinic on every street", bins outnumber trees in city parks, and Bigtopian relations have become a minefield. Crime, especially youth-related, is totally unknown, thanks to a very well-funded police force and progressive social policies in education and welfare. Tvanksta's national animal is the white stork, which soars majestically through the nation's famously clear skies, and its national religion is Romowe.

Tvanksta is ranked 664th in the world and 21st in The East Pacific for Largest Basket Weaving Sector, scoring 12,154.08 on the Hickory Productivity Index.