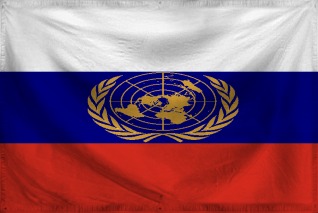 The United Allied States of United Nations of Earth Federation is a gargantuan, safe nation, ruled by Secretary-General Dimitry Cárdenas with a fair hand, and renowned for its free-roaming dinosaurs, keen interest in outer space, and stringent health and safety legislation. The compassionate, democratic, cheerful population of 16.371 billion Earthians are free to do what they want with their own bodies, and vote for whomever they like in elections; if they go into business, however, they are regulated to within an inch of their lives.

The enormous, liberal, socially-minded, outspoken government juggles the competing demands of Education, Environment, and Healthcare. It meets to discuss matters of state in the capital city of United City. The income tax rate is 100%.

The frighteningly efficient Earthan economy, worth a remarkable 5,134 trillion Uniteds a year, is driven entirely by a combination of government and state-owned industry, with private enterprise illegal. The industrial sector, which is highly specialized, is led by the Information Technology industry, with significant contributions from Book Publishing and Tourism. Average income is an amazing 313,635 Uniteds, and distributed extremely evenly, with practically no difference between the richest and poorest citizens.

Photographers can be found hiding behind the curtains in Secretary-General Dimitry Cárdenas's bedroom, the carbon tax fund gladly supplies warm blankets when the poor can't pay their heating bills, holidaymakers sleep curled up on the floor as hotel beds are replaced with oversized bookcases, and the realistic depiction of tentacles is on the core syllabus of most art schools. Crime is totally unknown. United Nations of Earth Federation's national animal is the World, which frolics freely in the nation's many lush forests, and its national religion is Secularism.

United Nations of Earth Federation is ranked 240,598th in the world and 895th in The Communist Bloc for Largest Cheese Export Sector, scoring -32.67 on the Mozzarella Productivity Index.

The Workers Union of Habsburg-Lorraine,