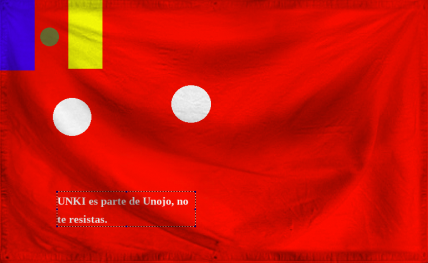 The Unojoish Rep of Unojoish North Kuril Islands is a massive, efficient nation, ruled by Diplomat Wad Peckerson with an even hand, and remarkable for its state-planned economy, keen interest in outer space, and suspicion of poets. The hard-nosed, devout population of 1.721 billion Unojoians are highly moralistic and fiercely conservative, in the sense that they tend to believe most things should be outlawed. People who have good jobs and work quietly at them are lauded; others are viewed with suspicion.

The medium-sized, corrupt, moralistic government juggles the competing demands of Law & Order, Spirituality, and Industry. It meets to discuss matters of state in the capital city of LNA Embassy. Citizens pay a flat income tax of 43.4%.

The very strong Unojoish economy, worth 118 trillion Quintos a year, is driven entirely by a combination of government and state-owned industry, with private enterprise illegal. However, for those in the know, there is a slick, highly efficient black market in Arms Manufacturing, Information Technology, Retail, and Trout Farming. The private sector mostly consists of enterprising ten-year-olds selling lemonade on the sidewalk, but the government is looking at stamping this out. Average income is 68,832 Quintos, with the richest citizens earning 7.3 times as much as the poorest.

Bruised children are made to thank their bullies for the valuable life lessons, fancy dress parties are raided by military police for new recruits, fast-food chefs regularly win Health Innovation Awards for spitting on burgers, and half of Unojoish North Kuril Islands just lost MyFace after space debris collided with a major communications satellite. Crime, especially youth-related, is totally unknown, thanks to the all-pervasive police force and progressive social policies in education and welfare. Unojoish North Kuril Islands's national animal is the Sklegg, which teeters on the brink of extinction due to widespread deforestation, and its national religion is Conjointism.

Unojoish North Kuril Islands is ranked 235,532nd in the world and 21st in TNA HQ for Best Weather, with 43 meters of sunlight.