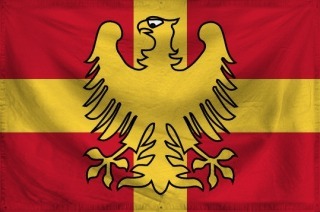 The Free Land of Varavano is a gargantuan, environmentally stunning nation, ruled by President Julia Vernatti with a fair hand, and notable for its irreverence towards religion, punitive income tax rates, and devotion to social welfare. The compassionate, hard-working, democratic, cheerful population of 24.344 billion Varavanians hold their civil and political rights very dear, although the wealthy and those in business tend to be viewed with suspicion.

The enormous, liberal government juggles the competing demands of Education, Environment, and Welfare. It meets to discuss matters of state in the capital city of Lilianaso. The income tax rate is 100%.

The frighteningly efficient Varavanoan economy, worth a remarkable 6,963 trillion Vanoes a year, is driven entirely by a combination of government and state-owned industry, with private enterprise illegal. The industrial sector, which is highly specialized, is led by the Book Publishing industry, with major contributions from Tourism and Information Technology. Average income is an amazing 286,032 Vanoes, and distributed extremely evenly, with little difference between the richest and poorest citizens.

The media have begun calling the government treasury "President Julia Vernatti's stash", the government spends more on chasing distant comets than on basic infrastructure, children who display even minimal sporting aptitude are immediately assigned a personal trainer, and crowded passenger trains are near-silent save for the soft tap of fingers on touchscreens. Crime is totally unknown, thanks to a capable police force and progressive social policies in education and welfare. Varavano's national animal is the Peregrine Falcon, which soars majestically through the nation's famously clear skies.

Varavano is ranked 1,078th in the world and 1st in Democratic Socialist Assembly for Highest Economic Output, with 6,963 trillion Standard Monetary Units.

Most Recent Government Activity: 22 hours ago

Oh my god it is so hard to find a name,