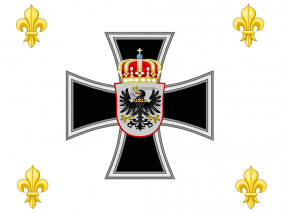 The Empire of Velitaris is a gargantuan, genial nation, ruled by Emperor Valtteri Mäkinen with an even hand, and renowned for its museums and concert halls, keen interest in outer space, and sprawling nuclear power plants. The compassionate, humorless population of 16.988 billion Velitarisians are fiercely patriotic and enjoy great social equality; they tend to view other, more capitalist countries as somewhat immoral and corrupt.

The medium-sized, corrupt government juggles the competing demands of Education, Healthcare, and Defense. It meets to discuss matters of state in the capital city of Kaiserhof. The average income tax rate is 86.3%, and even higher for the wealthy.

The frighteningly efficient Velitarisian economy, worth a remarkable 3,308 trillion Reichsmarks a year, is quite specialized and led by the Tourism industry, with major contributions from Book Publishing, Arms Manufacturing, and Information Technology. State-owned companies are common. Average income is an impressive 194,730 Reichsmarks, and distributed extremely evenly, with practically no difference between the richest and poorest citizens.

Protesters are up in arms over new nuclear power stations, the government defends a woman's right to choose, bins outnumber trees in city parks, and engaged partners detail their fiancés' private lives in detail to prurient bureaucrats. Crime, especially youth-related, is totally unknown. Velitaris's national animal is the Black Eagle, which soars majestically through the nation's famously clear skies, and its national religion is Imperial Cult.

Velitaris is ranked 151,653rd in the world and 93rd in Eientei Gensokyo for Most Pro-Market, scoring 26.78 on the Rand Index.

Most Recent Government Activity: 8 hours ago