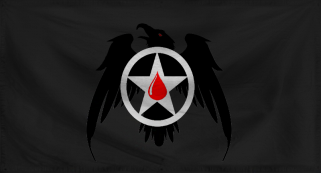 The Top Wolfmensch of Armaros is a massive, orderly nation, ruled by joWhatup with an iron fist, and renowned for its infamous sell-swords and suspicion of poets. The hard-nosed, cynical population of 4.913 billion Armarosians are ruled by a mostly-benevolent dictator, who grants the populace the freedom to live their own lives but watches carefully for anyone to slip up.

The medium-sized, well-organized government juggles the competing demands of Administration, Education, and Defense. It meets to discuss matters of state in the capital city of Pits of Shadow. The average income tax rate is 28.8%, but much higher for the wealthy.

The Armarosian economy, worth 217 trillion souls a year, is led by the Tourism industry, with major contributions from Uranium Mining, Woodchip Exports, and Cheese Exports. Average income is 44,274 souls, and evenly distributed, with the richest citizens earning only 2.4 times as much as the poorest.

50% of adverts on children's television are for clothes made of cotton wool, children are disappointed to learn that cavemen never had a yabba-dabba-doo time riding dinosaurs to work, Armarosians incessantly needle their doctors for relief, and newly synthesized elements' half-lives are a million times shorter than the time it takes to say their names. Crime, especially youth-related, is almost non-existent, thanks to a capable police force and progressive social policies in education and welfare. Armaros's national animal is the Wolf, which can occasionally be seen sifting through garbage in the nation's cities, and its national religion is The Path of Cruor.