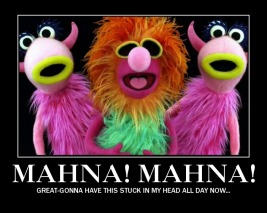 The Empire of Mahna-Mahna is a gargantuan, environmentally stunning nation, remarkable for its enslaved workforce, state-planned economy, and punitive income tax rates. The hard-nosed, democratic population of 27.929 billion Mahna-Mahnans are fiercely patriotic and enjoy great social equality; they tend to view other, more capitalist countries as somewhat immoral and corrupt.

The government — a sprawling, bureaucracy-choked, socially-minded morass — juggles the competing demands of Welfare, Education, and Healthcare. The average income tax rate is 71.6%, and even higher for the wealthy.

The large but sluggish Mahna-Mahnan economy, worth 596 trillion Doots a year, is driven entirely by a combination of government and state-owned industry, with private enterprise illegal. However, for those in the know, there is a slick, highly efficient, highly specialized black market in Information Technology, Arms Manufacturing, Tourism, and Basket Weaving. The private sector mostly consists of enterprising ten-year-olds selling lemonade on the sidewalk, but the government is looking at stamping this out. Average income is 21,375 Doots, and distributed extremely evenly, with little difference between the richest and poorest citizens.

Polygamy is legal, immigrant Maxtopians are routinely sold on popular internet auction sites, scientists recently cloned the long-extinct feather-bellied Pink furry thing, and streakers swamp all public events in order to bare it all. Crime is totally unknown, thanks to a very well-funded police force and progressive social policies in education and welfare. Mahna-Mahna's national animal is the Pink furry thing, which frolics freely in the nation's many lush forests.

Mahna-Mahna is ranked 106,169th in the world and 47th in Florida for Most Advanced Law Enforcement, scoring 1,471.94 on the Orwell Orderliness Index.

Most Recent Government Activity: 25 days ago