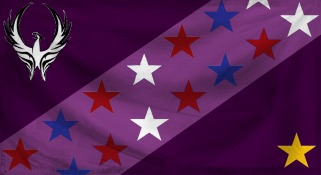 The United States of Indy

The Federal Republic of The United States of Indy is a gargantuan, environmentally stunning nation, ruled by Giovanni J Bultinck with an even hand, and renowned for its anti-smoking policies, keen interest in outer space, and devotion to social welfare. The compassionate, cheerful population of 10.246 billion United States of Indyians are fiercely patriotic and enjoy great social equality; they tend to view other, more capitalist countries as somewhat immoral and corrupt.

The large, socially-minded government juggles the competing demands of Law & Order, Environment, and Education. It meets to discuss matters of state in the capital city of Kennedy DC. The average income tax rate is 92.7%, and even higher for the wealthy.

The thriving United States of Indyian economy, worth a remarkable 1,025 trillion euros a year, is driven almost entirely by government activity. The industrial sector is mostly comprised of enterprising ten-year-olds selling lemonade on the sidewalk, although the government is looking at stamping this out. Average income is an impressive 100,069 euros, and distributed extremely evenly, with practically no difference between the richest and poorest citizens.

Up to 40% of voters can finally read the issues they're deciding on, power stations shutting down at night has made bedtime reading tricky, conspiracy theorists allege that the government is spying on them through their carbon monoxide detectors, and a third of United States of Indyians are e-certified CEOs. Crime is totally unknown, thanks to the all-pervasive police force and progressive social policies in education and welfare. The United States of Indy's national animal is the cat, which frolics freely in the nation's many lush forests.

The United States of Indy is ranked 7,113th in the world and 220th in The East Pacific for Most Advanced Public Education, scoring 12,622.06 on the Edu-tellignce® Test Score.

Most Recent Government Activity: 9 hours ago